Join us as we talk golf on our blog, walk through and analyze some swings, and gain some useful insights over on our instruction page with video clips of Long game, Iron play, Chipping, Bunkers and putting with fresh content added all the time.

Got letters, feedback or questions for the champ? Send them to us: info@amgolfworld.com

Drop us your email here to join in the conversation.

Success!! A mail is on it's way to you to confirm you've been added to the list. Share with friends who you'd like to compete against.

Join the World Amateur Order of Merit. Get ranked. Play with friends. 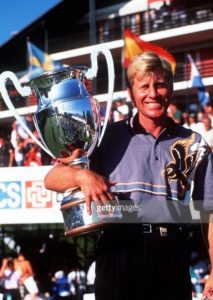 Jeff Hawkes turned professional in 1974. He played on the European Tour for over thirty years, making the top one hundred on the European Tour Order of Merit every year from 1977 to 1991, with a best ranking of 34th in 1987. His European Tour wins came at the 1979 The Rolex Open and the 1991 Canon European Masters Swiss Open. He has also won three tournaments on the Southern Africa Tour, now the Sunshine Tour. Hawkes joined the European Seniors Tour in 2004 and had several top 5 finishes but yet to win at that level. Jeff also worked as a golf commentator and analyst for Sky Sports in the United Kingdom. His TV career was over several years working for Shy, Channel 7, PGA Tour and Super sports TV.

Jeff a successful tour golfer with consistent performances and a well-respected player by his peers also spent many years teaching golf. His contribution to teaching spans from the beginner to the Professional ranks.
Now it is your turn ask the Champ.

Got letters, feedback or questions for the champ?
Send them to us.
info@amgolfworld.com